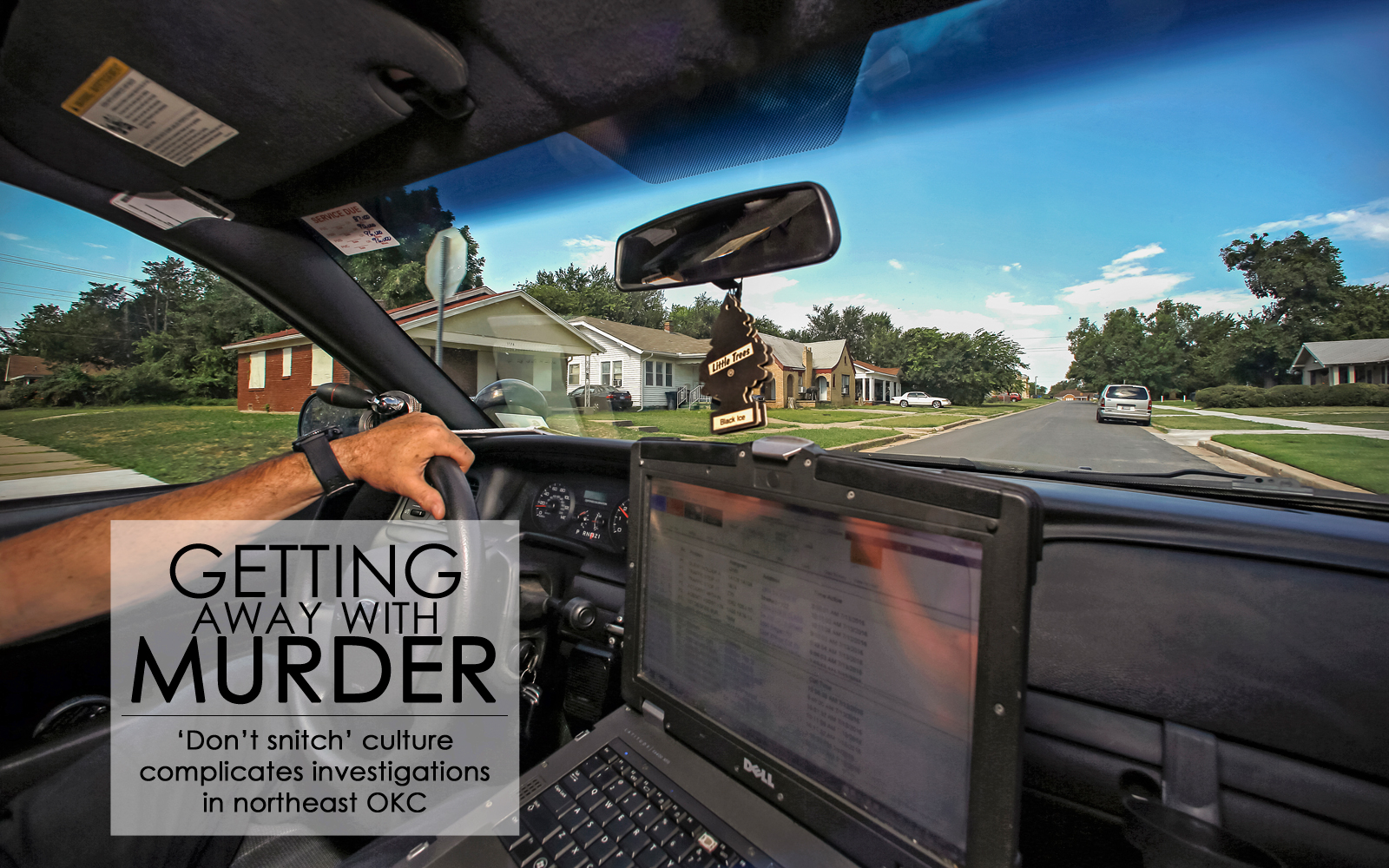 If there’s a ground zero for the epidemic of unsolved homicides in Oklahoma City since 2008, it might be a swath of city blocks that lie within view of the state Capitol on the city’s northeast side. The area, between NE 10 and NE 36 and N Lincoln Boulevard and Interstate 35, is predominantly black and home to some of the state’s poorest residents.

It’s in these neighborhoods, with names like Carverdale, Ross Heights and Culbertson East Highlands, that police and prosecutors say they find little of the public assistance essential to solving killings.

In a city that sprawls over 620 square miles, more than one out of every 10 unsolved homicides occurred within these 8.5 square miles, an analysis by The Oklahoman has found.

“They drive around, but they don’t do much,” said Rita Chambers, whose brother was stabbed to death in an altercation last year in northeast Oklahoma City.

Oklahoma City Police Chief Bill Citty blamed much of the area’s violent crime on gangs. In the last few years, the department increased patrols in the area, leading to a decline in the number of drive-by shootings, police say.

But he also attributed many of the deaths to what he described as an unhealthy gun culture — one that can turn a petty argument into a killing, too often the type of killing that proves impossible to solve.

Oklahoma County District Attorney David Prater, whose office prosecutes most Oklahoma City homicides, said while "there are innocent victims, no doubt about it," many of those who are killed put themselves in jeopardy.

They died on street corners and in a car wash bay. They died at a city park and in a public housing complex parking lot. They died in living rooms and the driver’s seat of a cab.

Between Jan. 1, 2008, and June 30, 2015, 46 people were killed in this handful of northeast Oklahoma City neighborhoods. That number doesn’t include cases in which police shot and killed a suspect, murder-suicides, cases of self-defense, accidental deaths and one case that was still pending in court at the time of The Oklahoman’s analysis.

Of the 46 cases, 31 — or about two-thirds — failed to result in a conviction. That's nearly 20 percentage points higher than the rate at which homicides go unsolved citywide.

In two of the 46 cases, the suspect won acquittal, and in another seven, prosecutors filed charges but later requested they be dismissed. In another two cases, prosecutors declined to file charges, citing a lack of evidence.

The unsolved killings include 26 men, four women and one unborn child. Their age, excluding the unborn child, averaged 33.

All but two were black. Francisco Javier Ramirez, 19, and Freddy Valle, 22, both Hispanic, were found shot to death Sept. 16, 2012, in a car parked near NE 24 and Lottie Avenue. In that case, police arrested a suspect, but the district attorney declined to file murder charges, saying more investigation was needed.

Officers found the oldest victim, Nash Mitchell, 76, dead on Oct. 26, 2013, inside his home in the 2200 block of N Lottie Avenue. Mitchell was lying in a pool of his own blood and had a gunshot wound to his chest. Police never made an arrest in the case.

Excluding the unborn, the youngest victim was 7-week-old Diaric Zeigler, who died after being ejected from a van during a crash Aug. 8, 2009, near NE 35 and N Kelley Avenue. Tamyra Stiggers, accused of intentionally ramming the van with her vehicle, was acquitted of second-degree murder.

The unsolved killings, at times, came in bursts.

On the afternoon of March 9, 2012, police found retired bus driver Monretta Olden, 65, shot to death inside her home at 1132 Windemere Drive. Police never made an arrest.

Olden’s daughters said their family struggles to cope with their mother’s death.

“The unknown, it hurts me more than anything,” said Felicia Hayes-McGee, one of Olden’s daughters.

Prosecutors charged Joshua Londale Rogers, who police said was a member of the 107 Hoover Crips gang, but later requested the charges be dismissed.

Less than a month later, on July 2, 2012, Tracy Shane Williams, 30, was visiting a relative at Sooner Haven when he was shot. He died at OU Medical Center. The case, which police say was gang-related, remains unsolved.

Then, less than two months later, on Aug. 29, 2012, Quashea Monique Durham, a 20-year-old Rose State College student and mother of two young boys, was on the porch of a house at 1820 N Kelham Ave., when a man walked up and started shooting. Durham died at the scene. The shooting injured two others.

What followed is typical of the challenges investigators encounter when trying to solve homicides, said Capt. Paco Balderrama, a police department spokesman.

Even though there were several people inside and outside of the house when Durham was shot, none were willing to talk to police, Balderrama said. Police think the shooting might have been gang-related.

“We believe people have information on this case,” Balderrama said. “We believe that information could have led to the arrest of the person who committed this murder.”

Durham’s fiance, Jas Samuels, 26, of Midwest City, who was at work at a warehouse job when the shooting happened, said he thinks people were afraid to come forward.

“The guy who did it is still out, and he’s probably still around the neighborhood,” Samuels said.

Although homicide investigators often have extensive knowledge of what goes on in the communities where they work, they often can’t count on cooperation from the very people they need to bring into the investigation to make it successful, said David Kennedy, a criminology professor at City University of New York’s John Jay College of Criminal Justice.

Homicides and other gun violence in American cities usually are driven by a relatively small group of high-rate criminals — generally, less than a half percent of the city’s total population, Kennedy said. But that handful of high-rate criminals generally exists in communities where residents aren’t willing to cooperate with police — even upstanding residents who hate the violence, he said.

That’s particularly true in poor, predominantly black neighborhoods, where the relationship with law enforcement is often fraught with distrust.

In the neighborhoods that surround his church it can seem like the police are everywhere but where they’re needed most, Ware said. People in those neighborhoods may see police cars drive past their houses several times a day, he said, and many have stories about being pulled over for no reason. But residents still complain that if they call police for help, officers are slow to respond, he said.

That dynamic leaves some reluctant to talk to police, Ware said. Even law-abiding residents talk of feeling apprehensive when they see a police officer, he said. Sometimes, Ware, who is also a lecturer and fellow in the Oklahoma State University Office of Institutional Diversity, feels the same way himself.

Still, Ware said he was shocked by The Oklahoman’s analysis that showed so many homicides remain unsolved. He called the low rate at which killers are convicted overall, but in particular in northeast Oklahoma City, “an institutional problem.”

“That is incredible,” Ware said. “I had no idea that was happening here.”

As part of an initiative called Occupy the Corner-OKC, Jackson and other local residents stand on street corners in northeast Oklahoma City on occasional Saturdays, holding up signs promoting peace and interacting with passers-by, all in an effort to curb violence in the community.

Jackson said that after years of what they consider over-policing, most residents in northeast Oklahoma City see police as nothing more than a gun, a badge and a uniform, not a partner in their efforts to keep their communities safe. Police play a vital role in the community, he said, but it’s a job they can’t do if people won’t cooperate with them. Until a better relationship between the police and the community exists, that isn’t likely to happen, he said.

“We need the police to do what they do. And we certainly need them to solve crimes, which means that we’re going to have to be able to talk to police,” Jackson said. “But in order to have the kind of conversations that we need to have with them, it’s got to be some bedside manner, too.”

Even when the system essentially works and a conviction is won, the outcome doesn’t always satisfy.

Sitting on a wall in front of Ralph Ellison Library at NE 23 and Martin Luther King Avenue last month with her white pit bull, Frosty, Rita Chambers pointed to a parking lot about a block east, where a man stabbed her brother to death in December.

Chambers, 53, said she sees police officers drive that section of the city frequently, but help seemed slow to arrive the day she most needed it.

During the attack behind a Family Dollar store, the man stabbed her brother, Ronnie Temple, and cut Chambers’ leg with a knife.

Later that day, Ronnie Eugene Smith turned himself in to police and admitted to the stabbing. Prosecutors charged him with first-degree murder and assault with a dangerous weapon. Smith agreed to a plea deal for one count of first-degree manslaughter and a count of assault with a dangerous weapon. He was sentenced to 20 years in prison, court records show.

“Does that sound right?” Chambers asked. “Every time I say it, it doesn’t sound right … My brother’s dead, and you give him 20?”

It is in some of these same neighborhoods that Oklahoma City Police Officer Daniel Holtzclaw spent months hunting victims, sexually assaulting several black women before his arrest and conviction last year.

Eric Gill, youth and young adult pastor at Prospect Baptist Church in northeast Oklahoma City, said the Holtzclaw case is a good example of the breakdown in relations between police and residents on the northeast side.

Holtzclaw was able to prowl the neighborhood for months before a victim came forward to report what had happened. One of his victims later would testify that she didn’t report the assault immediately because she didn’t think anyone would believe her.

Gill said that worry isn’t unique to that woman. Many residents in the neighborhood feel powerless at the hands of the police, he said. It’s unsurprising, then, that people in that neighborhood would have second thoughts about reporting police misconduct.

“Why would anybody listen to me if I’m at the bottom of the sociological totem pole and I’m screaming rape to a cop?” Gill said.

Citty, the police chief, acknowledged that many residents in northeast Oklahoma City don’t trust his officers. It’s a problem the police are trying to address through outreach programs and community events that bring officers into the neighborhood for something other than arrests.

Citty said he thinks those efforts are making a difference. But he said mistrust of the police is a generational issue, one that’s passed down from parents to children. Bridging such a longstanding divide could take years.

But it also has to change if the department hopes to bring more killers to justice, he said. Investigators can’t hope to solve killings — or any other crime — without cooperation from the public.

Ware, the Baptist minister, said he’s pleased to see the police department doing more to try to repair its relationship with residents in northeast Oklahoma City. He’d like to see a different kind of police presence in the community — one that allows residents to see police officers at grocery stores, lunch spots and out on the street, and not only when they’re arresting someone.

Even at that, though, Ware said the department has a long way to go.

"They have a lot of work to do to try to fix that relationship," Ware said. "I don’t know how they do it."