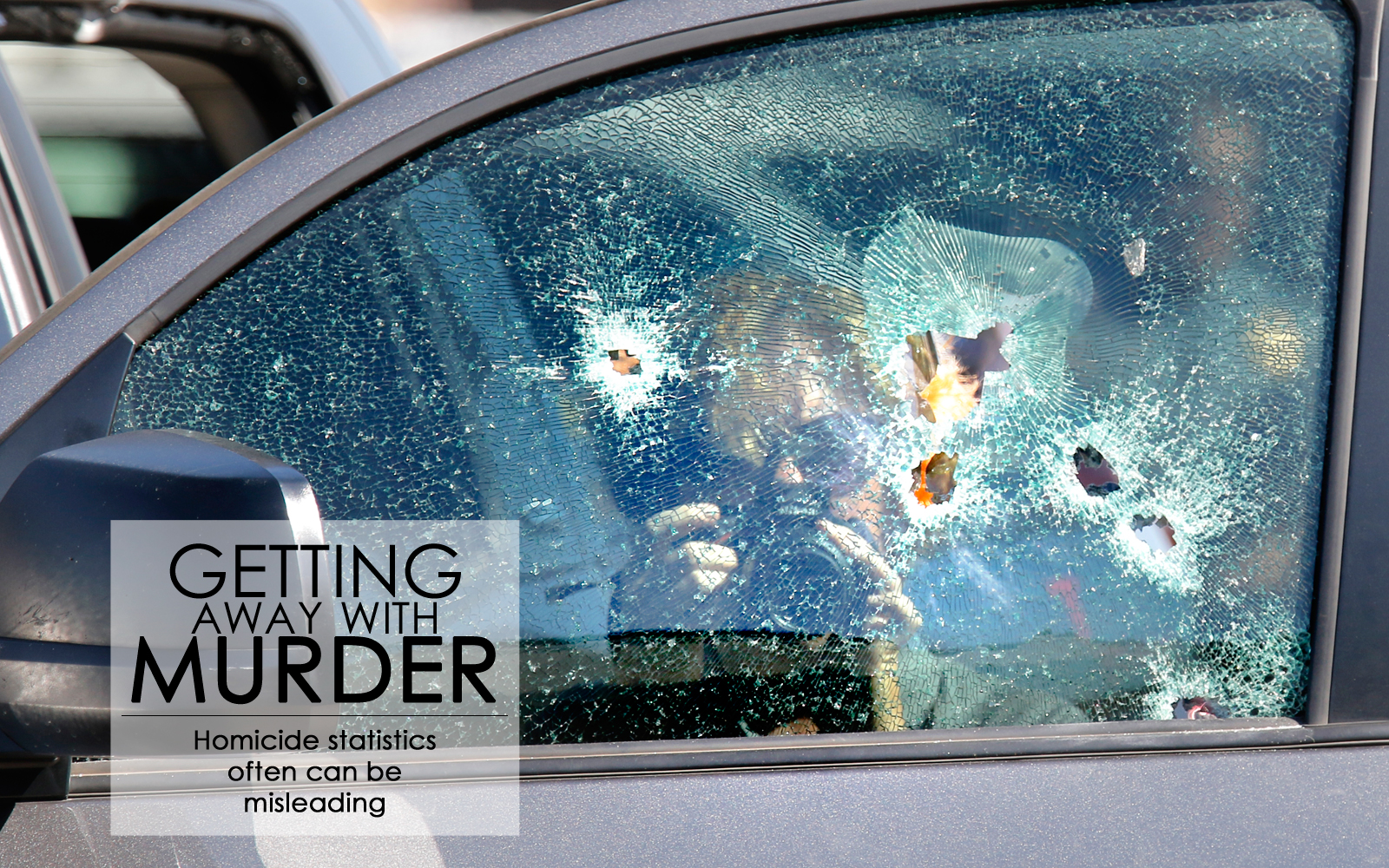 So just how does Oklahoma City stack up against other cities when it comes to solving homicides?

Good question. The problem is there’s no easy way to compare.

Even though it might be the most valuable measure of the criminal justice system — how many killers are convicted for their crimes — it’s not a number that is regularly tracked.

No national database on the percentage of homicide cases resulting in convictions appears to exist.

The FBI’s Uniform Crime Reporting program, considered the gold standard for national crime data, tracks homicide clearance rates — the percentage of cases where a suspect has been arrested, charged and turned over to the court for prosecution. So, too, do many large police departments, including Oklahoma City’s. But neither the bureau nor most police departments track the outcome of those cases.

And while many prosecutors track conviction rates — the percentage of cases they win — those figures only take into account cases that reach the courtroom. In Oklahoma City, about 43 percent of all homicide cases never make it to trial.

Taken alone, neither clearance rates nor conviction rates provide a complete picture of just how effective law enforcement is in solving homicides. In fact, both can leave the public with an inflated perception of law enforcement’s effectiveness in bringing murderers to justice.

Meanwhile, prosecutors won convictions in 218 of the 235 Oklahoma City homicide cases taken to trial during the time frame reviewed by The Oklahoman, an almost 93 percent rate.

But an Oklahoman analysis found that between Jan. 1, 2008 and June 30, 2015, nearly one out of every two potentially prosecutable homicides in Oklahoma City went unsolved.

During that period, 534 people died in Oklahoma City at the hands of another.

Ninety of the cases involved circumstances that made it unlikely anyone would ever be tried for a crime, including cases in which police officers killed a suspect, murder-suicides and justifiablehomicides. Another 30 cases were still pending in court at the time of the analysis.

“That really is a little bit frightening, just as a citizen, to think that… half the perpetrators right now are getting away with murder,” said ACLU Oklahoma legal director Brady Henderson.

“We try to do the right thing in every case, every time,” Prater said. “And if we are concerned about conviction rates, we’re not going to be filing the cases that are going to be the difficult ones to try.”

Oklahoma City Police Chief Bill Citty said his department tracks clearance rates to see how well its investigators are doing, but doesn’t track cases through prosecution. While he sees value in looking at homicide cases from start to finish, Citty said tracking only the clearance rate allows the department to gauge its own success without having to take into account other factors over which the department has no control, like the success rate of prosecutors.

But when an investigation and prosecution are treated as discrete functions rather than two pieces of a single process, it can leave systemic gaps that are difficult to bridge, said Jack Greene, a professor of criminology at Northeastern University in Boston. Police may arrest a suspect and turn the case over to prosecutors, only for prosecutors to find that investigators didn’t turn up enough evidence to secure a conviction, or that the evidence they did find is inadmissible in court.

During the period reviewed by The Oklahoman, prosecutors declined to file charges in nine Oklahoma City homicides cleared by police, citing a lack of evidence.

In those cases, the police could bear part of the responsibility for the suspect walking free, even though they may consider the case cleared, Greene said.

“I don’t think it’s enough for the police, particularly in homicide, to say ‘We did our job and now it’s up to the prosecutor,’” Greene said. “It seems to me that is a kind of a bit of a cop out because the reality is if you didn’t collect the evidence and you didn’t take the statements and you didn’t follow law in the process, the prosecutor doesn’t have very much that he or she can do.”

In another 34 Oklahoma City homicides, Oklahoma County prosecutors filed charges but later requested they be dismissed. Prater said prosecutors requested many of those dismissals because they recognized that they lacked enough evidence to prove the suspect’s guilt beyond a reasonable doubt.

Investigators can be frustrated to see prosecutors decline to file charges in cases they’ve worked, said Vernon Geberth, a retired New York Police Department homicide commander. Investigators often are in close contact with the families of victims, he said, and feel driven to seek justice on their behalf. Even in questionable cases, Geberth thinks prosecutors should put the evidence before jurors and trust them to come to the right conclusion.

“That’s why we have jurors,” Geberth said. “Give it to the fact-finders. The system is supposed to be that 12 people sit there and look at the facts and information and they come to a finding.”

But Prater said prosecutors often have no choice but to drop charges when they don’t think the evidence will lead to a conviction. If a prosecutor takes a case to trial with questionable evidence and loses the case, the suspect can never again be charged with the same crime, no matter how much evidence turns up later.

“Those are tough decisions,” Prater said. “Those are really tough decisions, especially when you believe you know who it was that committed that crime, you’ve got to dismiss the case against him. But the evidence wasn’t there to pursue it.”

Citty said that most of the fault for failing to solve the city’s homicides fell to his department. A district attorney can only prosecute cases based on the evidence the police provide and, too often, Citty said, the department fails to even identify, let alone arrest, a suspect.

That police and prosecutors separately test and measure their own piece of the criminal justice puzzle is not unusual, said David LaBahn, president of the Association of Prosecuting Attorneys, a Washington, D.C., based nonprofit.

“Their case is cleared by arrest, so as far as their agency is concerned, once they make that arrest, it’s now passed to the prosecutor’s office,” LaBahn said.

“While the prosecutors may assist in the investigation — they may go out to the crime scene … they may review warrants, they may be involved in the process — their job doesn’t really start until that arrest has happens, until the report has been transferred into the prosecutor’s office,” LaBahn said.

David Carter, a professor in the school of criminal justice at Michigan State University, said police and prosecutors have different goals, different functions and different ways of tracking success. Prosecutors rely on police to identify the offender and to develop probable cause to arrest that person, but they typically have their own investigators to help develop evidence they need for prosecution, Carter said. Their standard of proof — proof beyond a reasonable doubt — is much higher.

Those two different standards of evidence — probable cause for police and beyond a reasonable doubt for prosecutors — exist for a reason, said Charles Wellford, a professor emeritus of criminology at the University of Maryland - College Park. The probable cause standard for police helps communities to keep crime levels in check by having police make arrests. But by setting a higher bar for prosecutors to secure a conviction, those communities can have a certain amount of assurance that police and prosecutors are putting the right people in prison. Errors do happen, Wellford said, but that high bar for prosecutors is meant to minimize them.

In at least one state, police and prosecutors use a more seamless approach to homicide investigations. In Massachusetts, district attorneys' offices investigate homicides jointly with local or state police. Officials there say that approach means detectives and prosecutors work hand in glove from the beginning of the investigation through the end of the judicial process.

“Both of them are looking at the end result, which is not an arrest, not an indictment, not a conviction, but a jury verdict that is upheld on appeal,” said Jake Wark, a spokesman for the Suffolk County District Attorney’s Office, which prosecutes homicides committed in Boston.

During homicide investigations, Boston police detectives gather facts while prosecutors work alongside them at each turn, considering each element that needs to be cleared or proven before the case goes to trial, Wark said.

Berkshire District Attorney David Capeless, president of the Massachusetts District Attorneys Association, said that arrangement has a number of advantages. By being involved in the investigation from the beginning, prosecutors can help ensure that detectives don’t make mistakes that would hurt the prosecution’s case at trial. The arrangement also encourages investigators to approach cases with an eye toward conviction, he said.

“The investigation is taking the long look, not just trying to secure an arrest,” Capeless said.