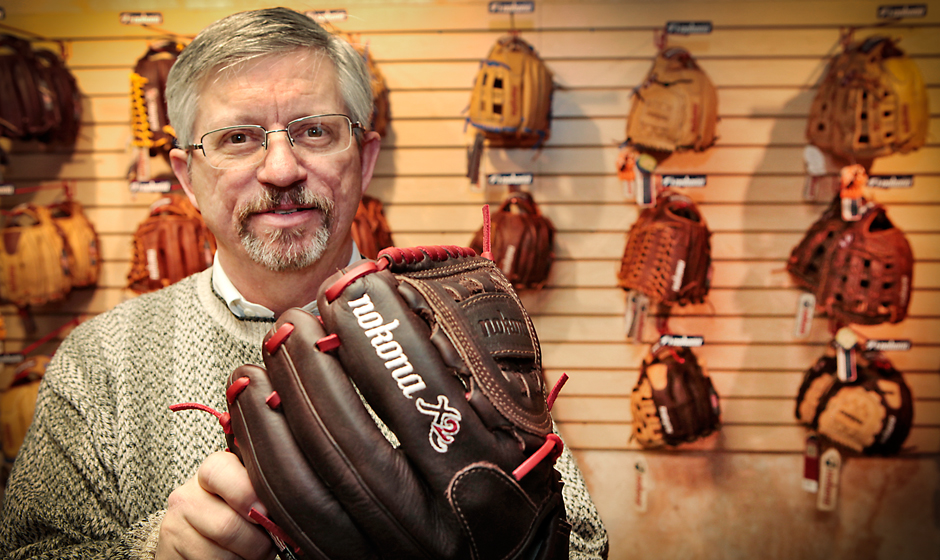 THIS SPECIAL PRESENTATION IS BROUGHT TO YOU BY NEWSOK ADVERTISERS

Leave a baseball glove unattended, and one of the two is likely to make off with it.

For 80 years, the Storey family has been happy to produce a steady supply of replacements.

Their company, Nokona, is one of the few in America that still makes a limited number of individually handcrafted baseball and softball gloves at a factory in Nocona, just across the Red River from Oklahoma’s Jefferson County.

“Leave a glove in the dugout after the game and come back, and chances are it’s gone,” Storey said.

The 2014 baseball season is fast approaching for some. For others, it has started. And for families such as the Storeys, baseball spans generations. It’s not only the gloves the Storeys have made, but those passed down through other families. Some of these families thrive on the game; others never played beyond their youth.

Storey, 53, rolls through the past and present of the company, as if sharing family history — because he is. He’s talking in part about his late grandfather Bob Storey, father Bobby, 84, and his late uncle Jim.

The company rose out of a necessity — the need to be profitable. Bob Storey was working at a business partially backed by his father-in-law, banker Cad McCall. They were making purses and wallets. Only they weren’t selling a lot. So banker/father-in-law figured Bob, who had gone to Rice University to play baseball, surely knew how to make a baseball glove. He did not. But they found someone from back East who did. Storey learned and in 1934 made Nokona’s first baseball glove. 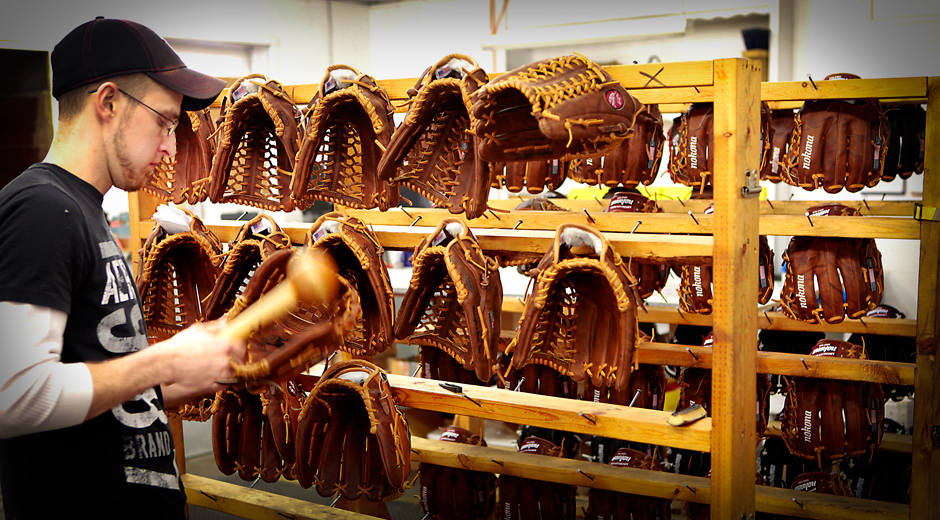 Josh Yeargin helps form a glove by pounding it with a mallet.

On a recent February afternoon, Josh Yeargin, 29, pulled a mobile rack lined with 20 finished gloves over to an area and started taking one off at a time to spray each with conditioning oil.

The sounds of the game are different here.

Behind Yeargin, it’s the slap of a mallet to help form a glove’s pocket. It’s the sound of co-workers pulling a hide off the rack. And in a corner, it’s the click of a hydraulic press cutting shapes.

Minutes later, Yeargin pulls a cart with boxes of gloves headed in various directions — such as Medford, Ore., Boston and Bastrop, La. They ship to retailers in Oklahoma and all other states as well as internationally, Rob Storey said.

The factory has that factory feel, but through Yeargin and others, also that personal, small-town touch in a town of about 3,000 people.

The company has a large number of long-standing employees, including some from Oklahoma.

Storey said it takes weeks to produce each glove — from inspecting the hides, to cutting the leather, to stitching, stamping, embroidering, lacing and pounding it to shape the pocket, and adding the oil to it.

Actually the clock on the process starts well before that. While many are focusing on the start of the 2014 campaign, Nokona already is preparing for the 2015 season.

The deep scent of leather to this factory is what the aroma of buttered popcorn is to a ballpark.

“We go to the leather tanneries, and we find the type of hides that we think are best suitable for making a ball glove,” Rob Storey said. “You’re doing that sometimes a year in advance so that you’re getting all the details worked out.

“We usually work about 18 months in advance when we’re developing a line of ball gloves, so we’re in our 2015 season now.” 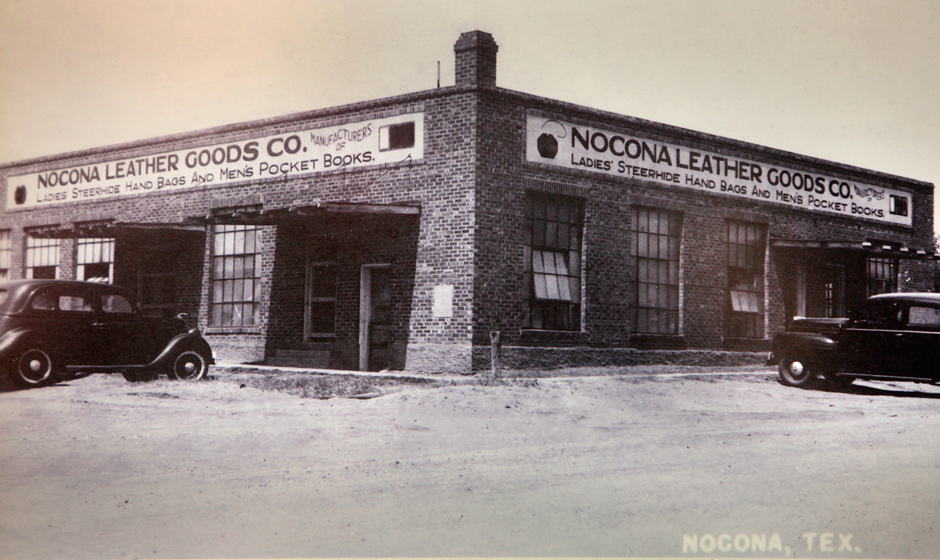 In 2010, Storey partnered with Jeff and Laura Beraznik of Cutters Gloves in Phoenix, to form American Original Ballglove Co., the parent company of Nokona.

“Jeff had a lot of experience in the glove market, so the relationship was natural,” Storey said.

In addition to making gloves, they also repair about 1,500 gloves a year.

“As for our repairs, if you’ve got a Nokona and you wear out the laces or the dog chews one of the fingers off,” Storey said, “you send it back to us and we will do the repair work for you.”

The company’s history includes sending thousands of gloves to Europe and the South Pacific for servicemen’s “health and welfare” during World War II, according to Nokona. It includes bouncing back from a fire in 2006 that burned through the more than 50-year-old factory. They made moves to new locations and continued on.

In the lobby of their current site at 105 Clay St. is a case with old photos, memorabilia and, of course, a few baseball gloves. Some from the 1950s retailed for $6.95 to $14.95. Even back before that Nokona was making gloves with no lacing between the fingers. Now the “bells and whistles” include the basket weave web, finger platforms, a wrist-anchor feature and exotic hides. 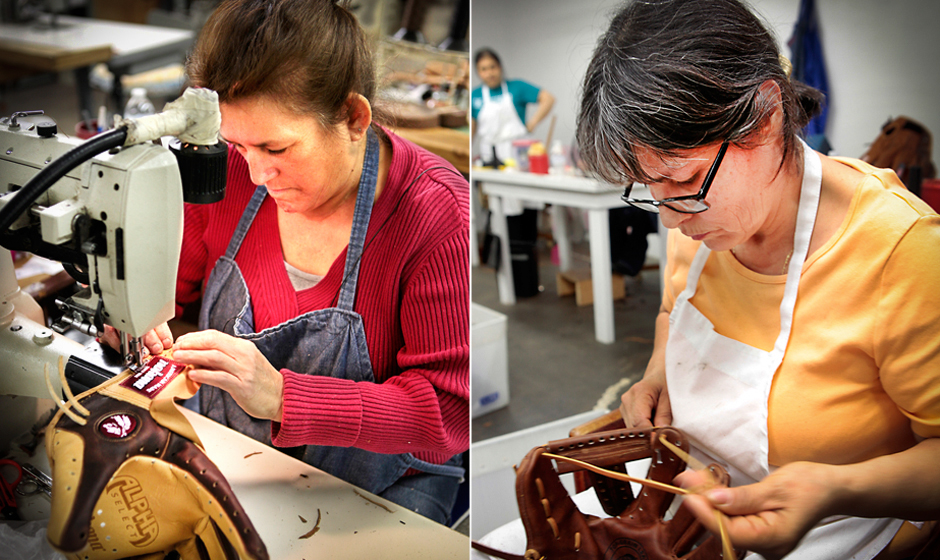 And who’s buying? While they sell a lot of adult softball gloves, the target audiences are elite team softball or baseball players or, more specifically, their parents. These younger players usually range from about 10 years old through high school. Storey said some of the gloves also are being used by college athletes.

What about the professional level? Storey said they don’t “pay players to wear the gloves.”

Nevertheless, despite the competitive landscape, Nokona has around 25 professional players on its roster, including Kevin Siegrist of the St. Louis Cardinals and Ross Ohlendorf of the Washington Nationals.

“So we basically go to spring training and we find these kids that are in Double-A, Triple-A something like that,” he said, “and we try to build a relationship with them. We call it an authentic relationship, which means we’re not paying them. If they want a good glove, we’re doing that.”

This is not a new concept for Nokona.

Storey talks about how his grandfather Bob would go to Fort Worth Cats games in the 1940s. They were at the time a Double-A affiliate of the Brooklyn Dodgers and had players such as pitcher Carl Erskine, who would go on to win more than 120 games in the majors.

“So he would go down and visit with them and when they might be going to Oklahoma City, they would stop by here and get off the bus, and he’d give them all a ball glove,” Rob said. “At that time, that was the going rate for us, something like two free ball gloves a year.

“Still to this day, there’s one or two of those players out there, they’re probably well up into their 80s, that will call and ask for their two free ball gloves for like their grandkids or their great grandkids.” 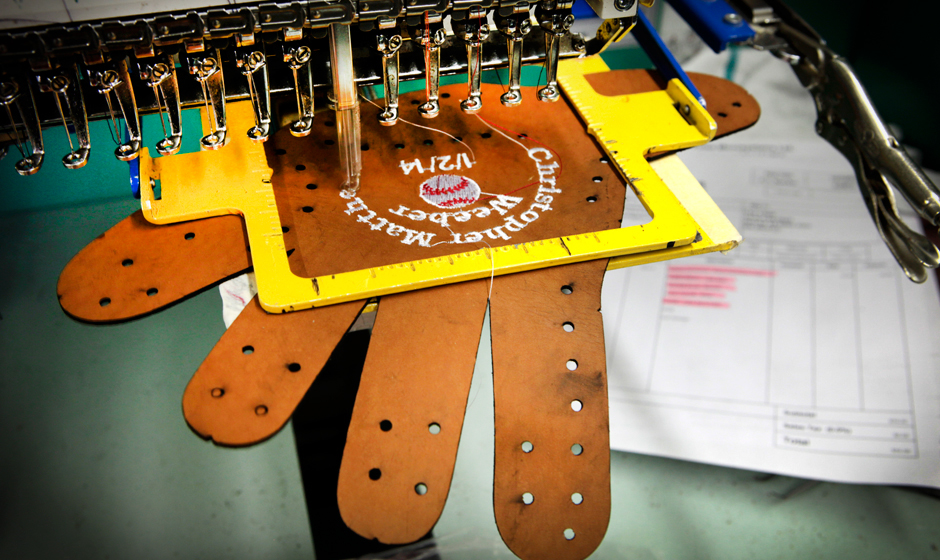 An embroidery machine stitches a glove.

Paul Ice, 53, has worked at Nokona for about 15 years and serves as the production manager. Before that he was employed at a western belt manufacturer in Nocona.

Ice grew up in the community, so he had the same connection to the company many children had. Ice played youth baseball.

Ice’s glove was a Nokona his parents “got for me here in town at the local Western Auto Store” when he was 9.

Asked how long he kept it, Ice stopped embroidering a name on the thumb of a glove, looked up and said, “I still have it.”

“People tend to have a very sentimental attachment to a baseball glove,” he said. “You know, I kind of feel like we make somebody’s day when we send them out.”