If the VCR freed viewers from the need to be tethered to their TV to watch their favorite programs, cable gave them more material to record. It was a game changer for couch potatoes everywhere.

But it wasn't fancy. There was no universal remote. If you wanted to change the channel, you had to use one of these things:

And even though it was a big jump from the era of four or five channels, it wasn't the endless array we're used to today. Here's the early Multimedia Cablevision lineup for Oklahoma City, circa 1980. Just 17 channels. 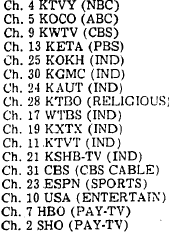 And there was fun, and kooky stuff like television auctions. Many cities had them.

And now the cycle has come full circle. Customers are dropping their cable subscriptions in favor of a more internet-based viewing experience. Netflix, Hulu and Amazon Prime have all become big players. Every major cable company in the United States lost subscribers last year.