Wayback Wednesday: No Luke or Leia for Oklahoma City

If you know someone who claims to have seen Star Wars in Oklahoma City on May 25, 1977, the day it opened, their memory is dodgy or they're telling a fib.

Sort of like the 20 million people who claimed to have been at Woodstock.

Star Wars may have "opened" on May 25 but it  did so in less than 40 theaters around the country, most of which were on the east and west coasts.

If you opened your copy of The Daily Oklahoman that day in 1977 you would have found films like "The Car that Eats People" and "Demon Seed" playing at Southpark Cinema.

"Sentinel" and "Sparkle" were playing at the Tower Theater on NW 23.

It's not that there were no good movies to see. Paul Newman's "Slapshot" was playing. Richard Pryor and Gene Wilder were riding the comedic rails in "Silver Streak".

Wilder could have also been seen in "Young Frankenstein".

There were  seven showings that day of George Lucas' masterpiece. Behold the first ad: 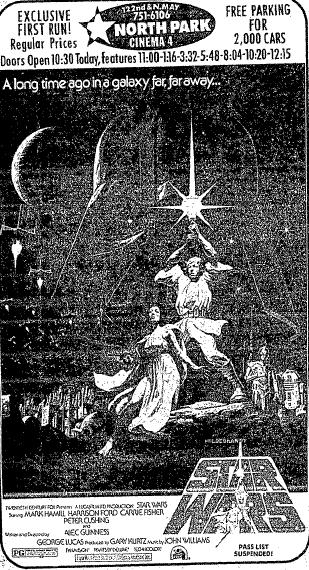 The ad mentions it is playing exclusively at North Park and touts the mall's parking "for 2,000 cars". But it also carries the ominous warning: "Pass list suspended!".

Here's a look at the original trailer for A New Hope which fans might have seen in the weeks and months leading up to its release:

Oklahoma City fans may have had to wait for the original film, but it was worth it. They loved it. Star Wars was still playing at North Park Mall on January 17, 1978, seven months after it opened.

CommentsWayback Wednesday: No Luke or Leia for Oklahoma City