The Anita Hill hearings: links and a look back

For many years, when people asked me to name the most interesting story I have covered since coming to Washington (in early 1990), I answered without hesitation that it was the Anita Hill-Clarence Thomas hearings of 1991.

I spent almost every minute in the Senate Caucus Room on that extraordinary long weekend. In the photo below, that's me,  behind the witness, with my head down, writing. 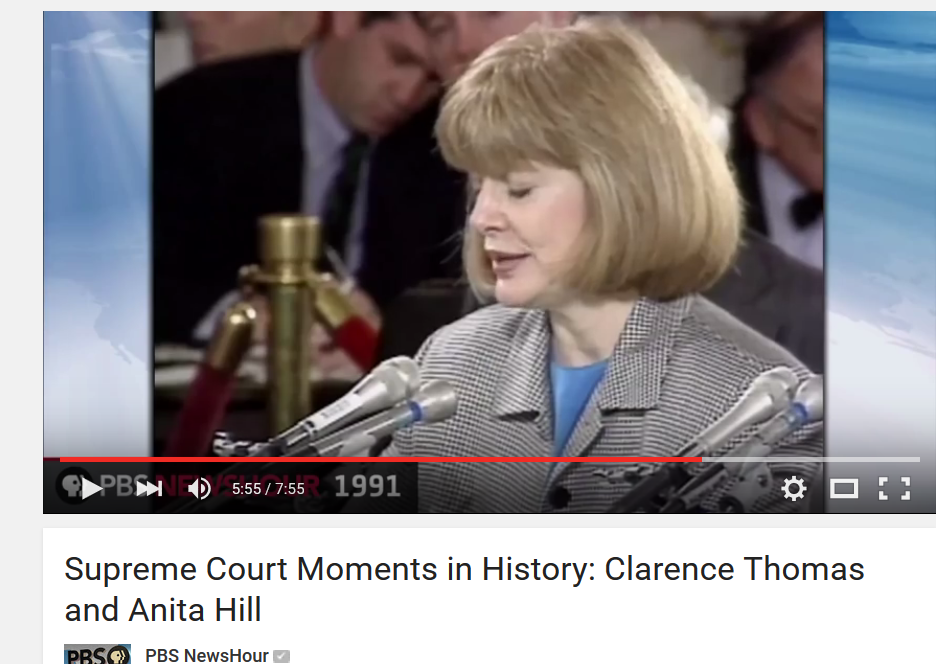 Unlike most scripted hearings on Capitol Hill, you never knew what was going to happen next. There was no precedent. And the only other story I've covered on the Hill that matched it in human drama was the day in 1998 when House speaker-designate Bob Livingston announced his resignation because of a sexual scandal on the same day the House impeached then-President Bill Clinton over a sex scandal.

In recent years when I've talked to young people, including Oklahoma journalism interns, about my job in Washington, I have noticed blank looks when I mentioned Anita Hill. So I have started to ask them whether they know her story. Sometimes no one raises a hand.

I'm surprised and disappointed in this, especially when it's University of Oklahoma students.

Anita Hill was a law professor at OU when her allegations of sexual harassment against then-Supreme Court nominee Clarence Thomas exploded in this town.

This weekend, HBO will begin airing a fictional retelling of those hearings, called "Confirmation."

I can't imagine that anyone who was there wants much to do with a made-for-TV movie about it, but for those with no background, it will at least provide a starting point.

I have culled through our archives and pulled every story I could find that I wrote about Hill before, during and after the hearings, including one in which I reported on her book and her criticism of my paper and our coverage.

Another story, toward the bottom of this long list, cites reportage from the book "Strange Justice" by then-Wall Street Journal reporters Jane Mayer and Jill Abramson. My memory is that the book had excellent reporting; it might be the best source for all the behind-the-scenes drama before and during the hearings.

Here are my stories:

Alan Simpson’s ginned up stuff “over the transom”

Special counsel’s report on the leak

Hill’s book and criticism of The Oklahoman

Chris Casteel began working for The Oklahoman's Norman bureau in 1982 while a student at the University of Oklahoma. Casteel covered the police beat, federal courts and the state Legislature in Oklahoma City. From 1990 through 2016, he was the... Read more ›

CommentsThe Anita Hill hearings: links and a look back