MOORE — The man on the 911 call spoke in an urgent voice, the terror still unfolding around him.

“What is your emergency?” the dispatcher asks.

“We have someone attacking someone in the building,” the man says.

It was 4:05 Thursday, a sunny and warm fall afternoon.

Alton Alexander Nolen, a 30-year-old ex-convict, had been fired from his job just moments before at Vaughan Foods, a food processing company located at 216 NE 12 in Moore.

Now, police say, an angered Nolen was taking his vengeance.

Nolen stormed out of the human resources office, located in a separate building on the southeast side of the property, got in his car and drove the short distance to the processing plant’s main warehouse building, striking another vehicle along the way, police said. He entered the warehouse.

There he encountered Colleen Hufford, a 54-year-old grandmother, who last year lost her home in the May 20 Moore tornado. A family friend said Hufford had worked in the office at Vaughan Foods for about five years. 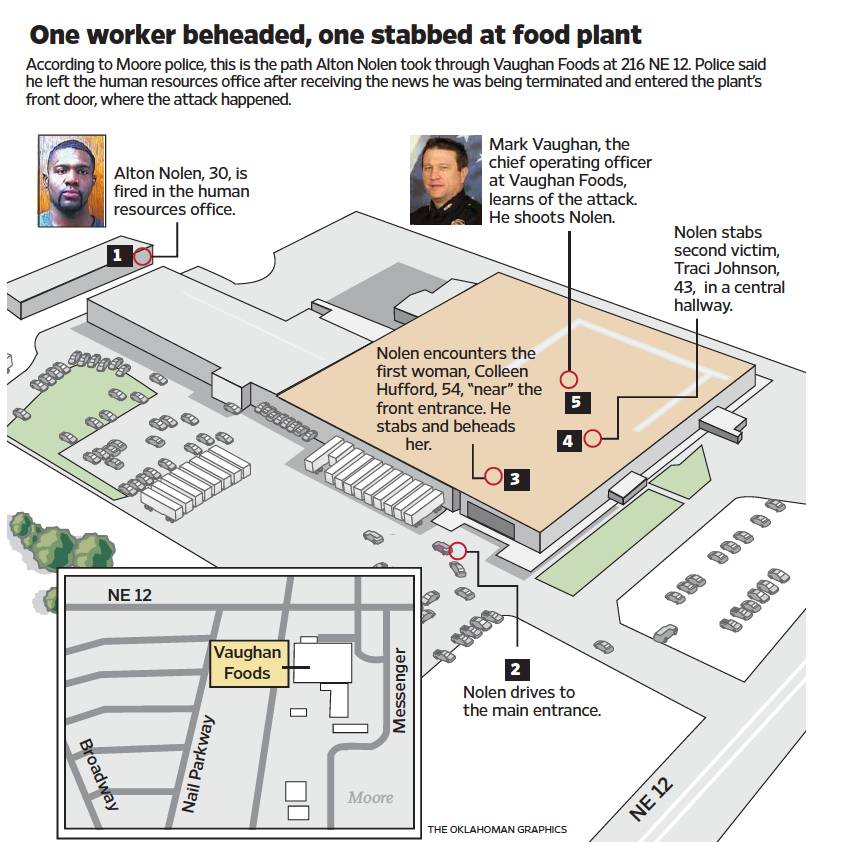 “She was a very kind, forgiving person. Friendly. Little shy, but once she got to know you, she’d talk your leg off,” said family friend Joe Weinzetl.

Nolen, described by authorities as a practicing Muslim who had recently been trying to convert co-workers, stabbed Hufford and then beheaded her. He used a knife that police said he may have used at his job cutting lettuce and vegetables.

Next, he turned on another employee, Traci Johnson, 43, of Oklahoma City, slashing her with the same knife.

From inside a locked office, the caller tells the 911 operator, “We can hear a lot of screaming.”

“We know that he’s loose. He has stabbed someone.”

Now another employee got on the line, telling the 911 operator that the attacker had gone through the front office, shipping office and customer service department where he’d stabbed one of the employees.

By now, three minutes had passed. On the recording of the 911 call, a man, believed to be Nolen, can be heard yelling in the background.

“Yeah, it sounds like he’s running around out here,” the caller tells her.

Moments later, at least two loud pops and a woman’s frightened voice can be heard.

“And that, that’s a gunshot,” the caller tells the dispatcher.

Shortly after Nolen stormed out of the human resources office, an employee had telephoned the on-site office of Mark Vaughan, the company’s chief operating officer, telling Vaughan that Nolen was out of control.

Vaughan, an Oklahoma County reserve deputy sheriff, arrived at the main building carrying a rifle. There, Vaughan confronted Nolen, then shot and wounded him.

Authorities say Vaughan’s quick actions saved the life of Johnson and possibly others.

Moore police responded to what they believed was an active-shooter situation. Once they arrived, they found the victims and evacuated the building. The department’s tactical team then searched the building.

Both Johnson and Nolen were taken to OU Medical Center Thursday. Authorities said Friday their injuries were not life-threatening.

Traci Johnson’s grandfather, Carroll McGinnis, of Cushing, said Friday that he heard from other family members that his granddaughter was doing well after Thursday’s attack.

“I think she’s going to be OK. They cut her on the face and stabbed her a time or two,” McGinnis said.

He said Johnson is from Cushing but had lived in Oklahoma City for several years.

He didn’t think she had been working at Vaughan Foods very long.

Nolen will remain under police guard until doctors approve his release. Once released, he will be taken to the Cleveland County jail, Moore Police Sgt. Lewis said.

Friday night, the Office of the Chief Medical Examiner issued a statement saying Hufford‘s death was a homicide, the result of decapitation due to multiple sharp force trauma to the neck.

Moore police have asked the FBI to help investigate the case, including looking into Nolen’s background, in part because of his religious activities. It’s unclear when Nolen converted to Islam, but prison records list his religious affiliation as Islam.

Nolen has the words “as-salaamu alaikum,” Arabic for “peace be with you,” tattooed on his abdomen, according to Corrections Department records. He has “Jesus Christ” tattooed on his chest, “Judah” on his left arm and praying hands on his right arm.

On a Facebook page where Nolen calls himself Jah’Keem Yisrael, the main photo shows several heavily armed Islamic fighters. The page also includes several pictures of Osama bin Laden as well as a photo posted March 7 of a beheading.

“There is no information currently in our possession to indicate there is any additional threat to the citizens of Oklahoma related to this incident,’’ Finch said.

The Islamic Council of Oklahoma condemned Thursday’s attacks, saying Oklahoma Muslims are “shocked, horrified and saddened about the loss of innocent life and the injuries.”

“Workplace and school killings are tragic but are unfortunately becoming more common in America,” the organization said in a prepared statement. “Every loss is felt by family, friends and strangers. Scholars and everyday Muslims maintain that no religious or political goal is ever achieved by these acts.”

Saad Mohammad, a spokesman for the Islamic Society of Greater Oklahoma City, said leaders of the society’s mosque in northwest Oklahoma City are on alert and taking security precautions to protect against retaliation.

Mohammad said anti-Muslim sentiment could be heightened due to several recent beheadings of Westerners and other violence being perpetrated overseas by the Islamic extremist group, ISIS.

“They have this ISIS thing on their minds and now this guy has brought it to America,” Mohammad said.

On Friday afternoon, a few delivery trucks entered and exited the Vaughan Foods facility. Television satellite trucks and media vehicles parked along the east side of the property but weren’t allowed on site. A few employees could be seen entering and leaving the premises, occasionally standing under a canopy to smoke cigarettes and talk with co-workers.

The company offered trained counselors to all employees at the Moore facility Friday. In a written release Friday night, the company stated, “We will continue to work through this extremely difficult time together, as a team … We would like to thank law enforcement for their swift response, and the community for the continued outpouring of support and condolences.”

Court records show that Nolen has three felony convictions. In the latest case, he pleaded guilty in 2011 to assaulting a highway patrol officer while fleeing arrest.

It took four law enforcement agencies, two helicopters and 12 hours to apprehend Nolen who fled into a wooded area. The two other convictions involved drug crimes. Corrections Department spokesman Jerry Massie said Nolen had no misconduct record during his time in the Oklahoma prison system. He was discharged in March 2013, but is still on probation.

On Facebook, Paige Nolen, who is believed to be Alton Nolen’s sister, wrote: “He is alive and doing well. Thanks to all praying warriors out there friends and family. To god be the glory! My bro is alive and just know that the devil is a lie. Please continue prayers.”

O'Connor joined the Oklahoman staff in June, 2012 after working at The Kansas City Star and St. Louis Post-Dispatch for a combined 28 years. O'Connor, an Oklahoma City resident, is a graduate of Kansas State University. He has written frequently... Read more ›

NewsOK has disabled the comments for this article.