A look at today's forecast for snow

A dusting of snow will be possible over much of Oklahoma and north Texas during the day today. However, most areas will only see flurries or a light dusting of snow. The exception will be over south central and southeast Oklahoma and parts of western north Texas, where up to 2 inches of snow may fall by late afternoon. Roads may become slick in places by mid to late afternoon in these areas.

The National Weather Service, Norman Forecast Office has issued a winter
weather advisory for light to moderate snow and minor
accumulations…which is in effect until 6 p.m. CST today for the counties of:

* Timing…snow flurries and light snow will begin as early as 10
a.m. Thereafter…bands of light to moderate snow will move
across southern Oklahoma and western north Texas through the
afternoon hours…tapering off by this evening.

* Amounts…total snow amounts of 1 to 2 inches are expected.

* Main impact…roads will become slick and hazardous by early
afternoon…and visibilities may be lowered to 2 miles or less
in the heavier snow bands.

Be careful if you have to travel. Even small amounts of ice and
snow can make roads and sidewalks slick and dangerous.

The counties of Harper-Woods-Alfalfa-Grant-Kay-Ellis-Woodward-Major-Garfield-
Noble-Roger Mills-Dewey-Custer and Beckham are under a wind chill advisory until 9 a.m. CST this
morning.

The wind chills will slowly increase above advisory criteria
by late morning…but will remain in the single digits much of the
day.

If you have to be outside dress in layers and leave no skin
exposed to the wind. Frostbite and hypothermia can happen
quickly. 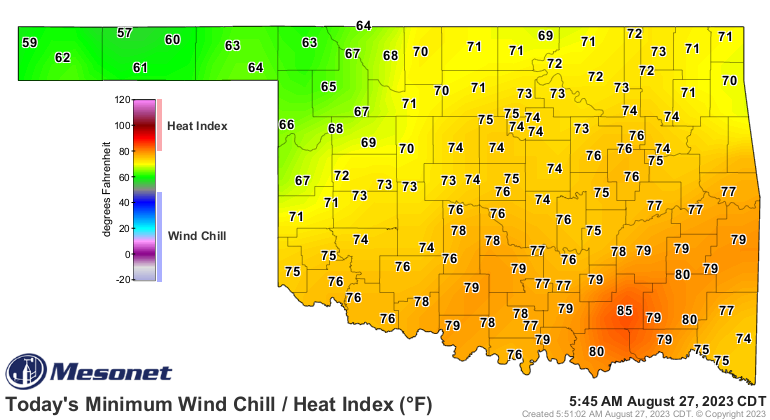 Some of the coolest minimum temperatures so far today at

Several record low temperatures were set or tied on Thursday, Feb. 6, 2014, including:

A record low temperature of 3 degrees was set at Gage yesterday.
This breaks the old record of 4 set in 1988.

A record low temperature of 6 degrees was set at Hobart yesterday.
This breaks the old record of 7 set in 1914.

A record low temperature of 10 degrees was set at Lawton municipal
yesterday. This ties the old record of 10 set in 1914.