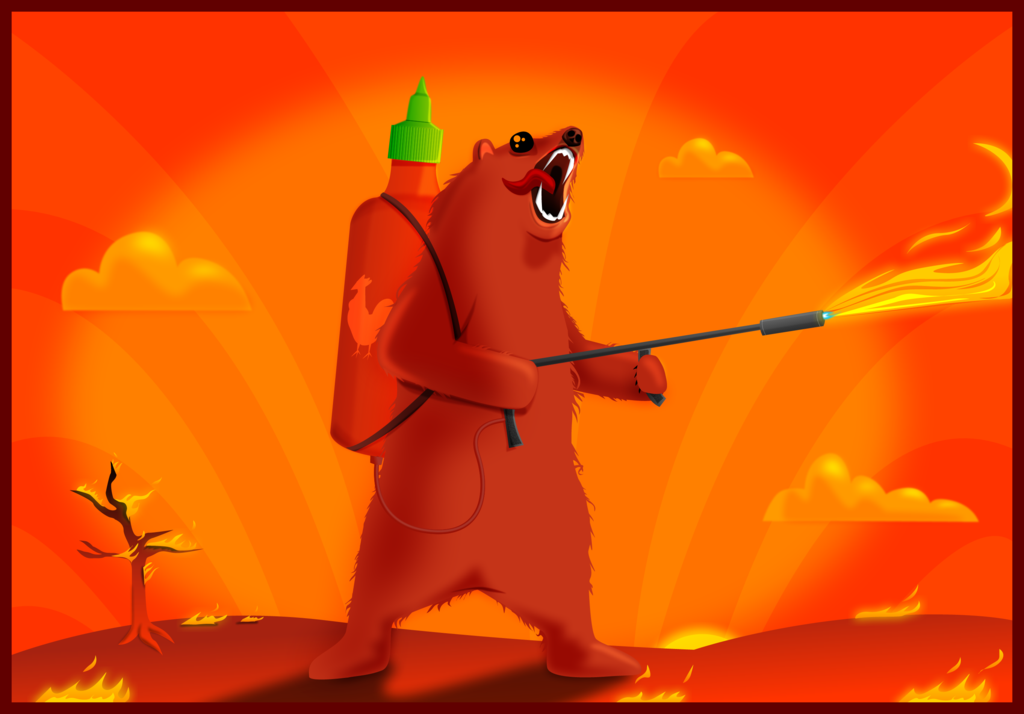 Good news, a Southern California  judge has denied Irwindale, Calif., residents’ attempt to shut down production of the practically holy chili nectar Sriracha  over complaints about the pungent smell of pepper and garlic fumes emanating from the factory, the Associated Press reports.

This means Sriracha grizzly can holster his flamethrower for the time being and late-night food trucks can postpone the planned siege of the city of Irwindale. BTW, the art work of Sriracha Grizzly can be purchased here.

The peppers get washed, mixed with garlic and a few other ingredients and roasted during this time of the year, when jalapeno peppers are harvested in central California and trucked to the 2-year-old plant. The pungent smell of peppers and garlic fumes is sent through a carbon-based filtration system that dissipates them before they leave the building, but not nearly enough say residents. They complained the odor gives them headaches, burns their throat and makes their eyes water.

Millions everywhere, including those down-wind of Oklahoma City’s Purina Plant, wondered why such sissies were allowed to live so close to the sacred sauce factory.

Huy Fong executives said they were cooperating with the city to reduce the smell, but balked at the city’s suggestion of putting in a new, $600,000 filtration system that may not be necessary.

Meanwhile, I’m advocating a #FreeSriracha hashtage until the Lullaby League and Lollilop Guild of Irwindale, Calif., are stamped out for good and our Holy Sriracha is left alone to send a soothing burn across over the world’s collective palate as the Good Lord intended.