Shock the world and Oklahoma

Yes, we actually have a WNBA team in the state. I’m often surprised by how many people don’t know this, so I thought I would take this opportunity to get the two of you acquainted with one another.

Tulsa Shock, meet Oklahoma. Oklahoma, this is the Tulsa Shock.

Now, here’s what you need to know about the team.

These athletes are on a mission to shock the world and revive a franchise that has won championships in the past at Detroit and harbored talents of some of the league’s greatest stars.

But since the franchise moved to Tulsa in 2010, it has struggled to put together successful runs or seasons. But that changed this year.

At the beginning of the season, the Shock suffered several overtime losses, but they weren’t blowouts. They also established themselves among other Western Conference teams by establishing a presence in the paint, as well as knocking down perimeter shots.

And, they’ve had huge wins over the Los Angeles Sparks and Minnesota Lynx. To put that in perspective, those are the top two teams in the Western Conference. And Minnesota has the best record in the league right now with hopes to win another championship this October. Did I mention the Shock defeated the Lynx on their home court?

Throughout the last four years, the team has been building its roster and adding valuable players to the lineup since most of the players from the Detroit Shock did not relocate with the franchise.

Last year, the team drafted Glory Johnson out of the University of Tennessee. Johnson played the center position last season and became known for her strength and aggressiveness on the boards.

This year, the team drafted Skylar Diggins, an outstanding point guard from Notre Dame who led the Irish to a pair of title games and to three consecutive Final Fours.

Being dubbed one of the “3 To See,” Diggins so far hasn’t performed as well as she did in college, but she’s hit several crucial shots and continues to strengthen her three-point shooting. After settling in, she seems to have found her role and place within this team.

The Aussie center is making big plays for the Shock this season and trails only former Baylor star and No. 1 draft pick, Brittney Griner, in blocks for the league. She was also the first woman to ever dunk at the Olympics. Not too bad, eh? 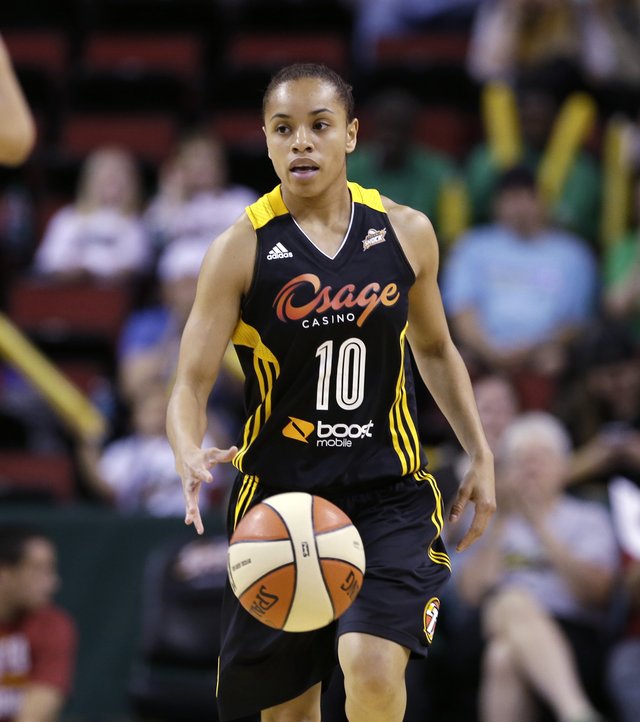 I compare her to Ivory Latta, of the Washington Mystics, because if she gets in the paint, she’s probably going to score. Her floaters and consecutive buckets have helped the Shock stay in the game when other shots just weren’t falling.

And I can’t forget to mention Riquna Williams. The University of Miami guard is putting up big numbers for the Shock this season and has the clutch shooting skills of Los Angeles Sparks’ Kristi Toliver. She can crossover, sprint to the bucket or shoot the outside shot. Either way, Kloppenburg seems to think it’s a safe bet if she’s got the ball in her hands.

In addition to more wins this season, Johnson and Cambage have also earned Player Of The Week honors in the league. Those are huge, especially since they are the Shock’s first after the relocation to Tulsa.

With all of this said, it’s no wonder the Shock has improved significantly this season. The chemistry is starting to form, as well as friendships among players. The talent is there, and it’s finally starting to shine through.

Oklahoma, don’t give up on this team. And if you didn’t know about them, you might want to check them out.

In the fourth season at Tulsa, the Shock is already making a push for the playoffs and hopes to eventually bring home a championship to Oklahoma.

Don’t let a few seasons of losses deter you from showing your Shock pride.

Minnesota has had a WNBA team for 15 years and only has one championship to show for it, but that doesn’t make them any less of a competitor.

Keep all of this in mind the next time someone tells you the Shock is the worst team in the league or is always losing. Please correct them, because it’s simply not true.

CommentsShock the world and Oklahoma